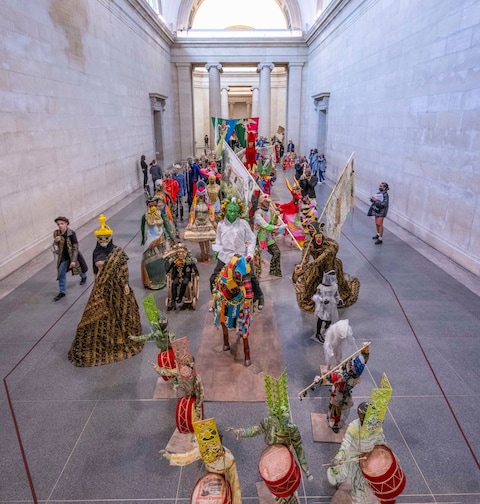 We arrived back in London a little over a week ago—it’s taken about that long to feel fully adjusted to time change (8 hours ahead of PDT). I guess it takes longer as we age. So far the weather’s been windy and cloudy but over the week it’s warmed up from high 40s to low/mid 50s. Not too bad for walking tourist types like us. Everyone’s told us that the week before we arrived was gorgeous and warm—the daffodils in the parks definitely testify to that as they have all gone over.

The flat is nicely as we left it in December. Even the butter and jam we left in the fridge is still serving us well. Speaking of food (no surprise there) I solved the problem of ‘who’s going to babysit my sourdough starter while we’re gone?’ with this: “Me! I’ll just bring it with us.” I triple wrapped the starter in sandwich baggies and put it in our checked suitcase. No problems there—it stayed nice and cold in the unheated luggage compartments. Fed it on arrival, realized we had no cast iron lidded pot to cook it in so Peter found one on amazon.co.uk and I made a loaf by memory (having also forgotten the recipe). But it turned out just fine. A little more food. April 1 was our 40th anniversary so we went out to dinner at Five Fields (we’d eaten there a few times before). I had the veggie tasting menu. Can you guess what this is?

One more foodie thing—one of our friends here is a restaurant reviewer and blogger. A place had just opened up in our neighborhood that he wanted to try so we three went for lunch. He knew the chef, so we got a few extra touches. He ordered the saffron risotto because he said that’s one of the dishes that sets the great apart from the good. This one was great. You may already know that the best risotto rice is carnaroli, but did you know that when it’s aged for a few years (you can buy it aged—not cheap of course) it just gets better? News to me.

Finally, an amazing installation at the Tate Britain. It’s there through January 2023, so really seriously think about seeing it. Google Hew Locke Procession to see and learn more about it. Here’s one of my photos of it from yesterday (also the one at the top–there are almost 100 figures). Incredible.